SBB for the independence centenary

A legendary Polish rock band in a unique project for the centenary of claiming independence by Poland. The music and history of Katowice and Upper Silesia joined in one, outdoor event.

SBB itself co-creates the history of Polish rock music. Three artists: Jozef Skrzek, Apostolis Anthimos and Jerzy Piotrowski have been playing with each other off and on for almost 50 years. Without a doubt, they belong to the greatest innovators of Polish rock. The name SBB, initially translated as Silesian Blues Band, has been quickly developed into Search [Szukaj], Destroy [Burz], Build [Buduj]. Thus, they have been persisting for decades to destroy and build our thinking about music. They released over 40 records, since the 70s. They perform concerts across the world, in 2006 they were invited as a special guest to perform alongside Deep Purple during their concerts in Poland. After a long, 4-year break, SBB performs again in an original setting with the drummer Jerzy Piotrowski. 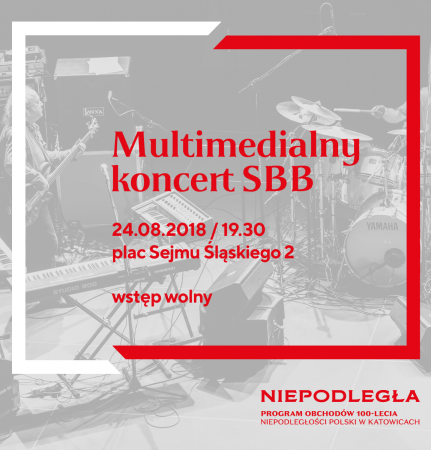 It is in this composition of members that SBB tunes will be heard during an outdoor concert, to celebrate the centenary of Polish independence. The greatest tunes of SBB will resonate in a unique surrounding – next to a historical building of the Silesian Regional Assembly. Their music will be accompanied by visualisations based on archive materials presenting Katowice of the past. In this way, the audience will be able to immerse themselves in history twice – the history of the city, and music.

There will be a limited number of seats, with standing places also available.